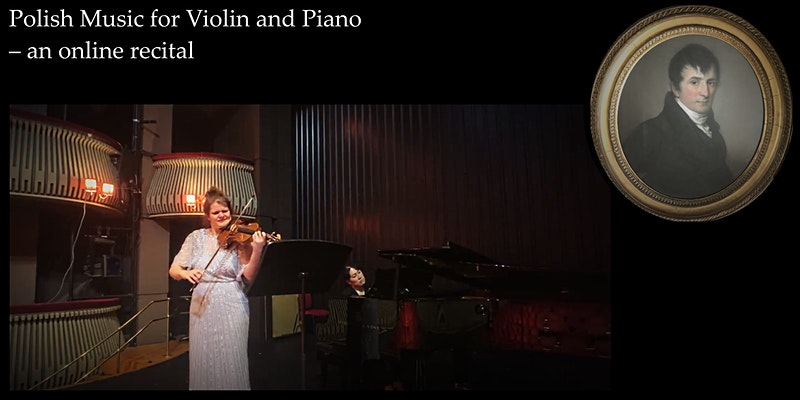 Polish Music for Violin and Piano – an online recital

An online premiere of a pre-recorded recital of violin and piano music by a variety of Polish composers, performed by Maja Horvat and Kumi Matsuo.

In this short pre-recorded recital, violinist Maja Horvat brings her characteristically passionate style to the repertoire of violin music from Poland. It begins and ends with two beautiful arrangements of Chopin Nocturnes, bringing out their soulful melodies in soaring lines for the violin. In between we hear works by three notable Polish violinist-composers. Grażyna Bacewicz stands alongside Maria Szymanowska as one of the most notable female composers in Polish musical history. Felix Yaniewicz, who began his career in the Polish Royal Chapel playing for King Stanislaus August Poniatowski, travelled to Vienna, Italy and Paris before settling in Britain where he became a celebrated virtuoso, conductor and impresario. Like his five violin concertos, the Elegie bears the hallmarks of his own performing style. Henryk Wieniawski, one of the greatest violinists of the nineteenth century, likewise had an international career, much of it spent in St Petersburg, and gave his name to an international violin competition that takes place in Poland every five years.

Preserving and maintaining of Polish gravestones in Scotland

A Polish-language talk on grave preservation.

Olga Marzantowicz from Historic Environment Scotland is going to deliver a talk (in Polish) about preserving and maintaining Polish gravestones in Scotland.

We intend to have this talk in English this autumn.

Polish Music for Violin and Piano – an online recital

The Life and Work of the Polish Genius of Science. A talk on Maria Sklodowska-Curie.

Ode to Autumn: Chopin in Scotland in 1848

Robert Porteous: A Scottish Merchant in Poland – Lecture and Music

Robert Burns and the Romantics event

Robert Burns and the Romantics

The celebration of the Polish Constitution Day 2017

Design Scottish Tartan for Krakow: the competition is now OPEN!

A Visit to the Palace of Holyroodhouse

Ryszard Piotrowski Sensuality in Marble and Bronze at Fringe 2015